ARE YOU READY? Access the Wahine Forum Program for important information! 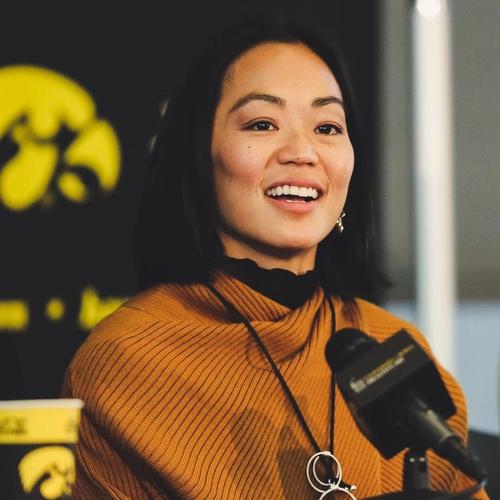 Talks covered by this speaker

Have you registered yet?

Our Full Forum ticket is a must if you want to get the most out of this event.

Clarissa Chun was named head coach of the University of Iowa women’s wrestling team on Nov. 18, 2021.

Chun is the first head coach in the history of the program. Iowa announced on Sept. 23, 2021, that it was adding women’s wrestling as an intercollegiate program, becoming the first NCAA Division I, Power Five conference institution to offer the sport.

In the United States’ most recent showing at the 2021 World Championships in Oslo, Norway, the women’s team won two gold, two silver and three bronze medals, a historic seven-medal performance that led Team USA to a second-place finish.

Prior to being hired at USA Wrestling, Chun was among the most accomplished athletes in international wrestling.

During her career, Chun won five U.S. Open titles. She was a 2011 Pan American Games silver medalist and won four gold medals at the Pan American Championships. She was a runner-up at four U.S. World Team Trials and three U.S. Opens, in a career which spanned 18 years competing at the Senior level.

Chun competed for Missouri Valley College, where she was a star on one of the pioneer women’s college wrestling team programs. She made the Senior Women’s National Team while still a student at Missouri Valley.

After leaving college, Chun became a U.S. Olympic Training Center resident athlete for many years, but has also trained at Regional Training Centers on college campuses.

Chun has coaching experience at both the international and college levels. She was a member of the men’s wrestling staff at West Virginia University, serving as the program’s Operations Assistant while also training at the Regional Training Center.

Your logo could go here!

If you'd like to get your brand in front of attendees following the categories this speaker is talking about (on this page, via email and during each talk) contact us.